There is no doubt that one of the most underrated components of the consumer Mac software that comes built into every Mac is Apple's QuickTime Player. The reason for this, of course, is that QuickTime, in addition to being a simple video player that edits mp4 Mac, also allows users to do some basic video trimming. This can come in handy for average users, especially when you consider how expensive, bloated, and complex video editing software can be. In this article, we will show you that how QuickTime edit videos on Mac.

Part1: Quicktime is More Than a Player

QuickTime Player is a simple yet powerful video editing program available for Mac. It includes features for casual video editors and professionals alike, so whatever your reason for looking for good edit mp4 Mac software, QuickTime Player has to cover you.

The QuickTime player was originally designed to play almost all types of multimedia files, but it has since been expanded to include a number of functions. For example, you can use it to quickly trim a video or record screen content for use in a tutorial or as a helpful example when troubleshooting. Follow these steps to edit a movie with QuickTime edit video Player for Mac.

Trimming Videos in QuickTime video player is another simple feature. You can delete the beginning or end, or simply shorten the movie or clip.

Step1: Click on “Open File” and select the video or movie to be edited. 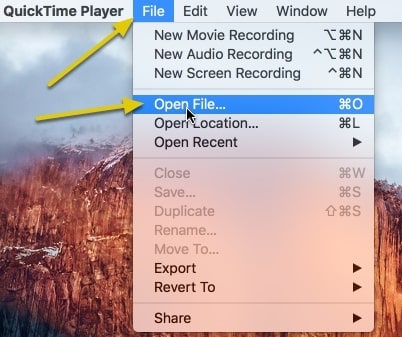 Step2: Click here to edit > trim from the menu bar. 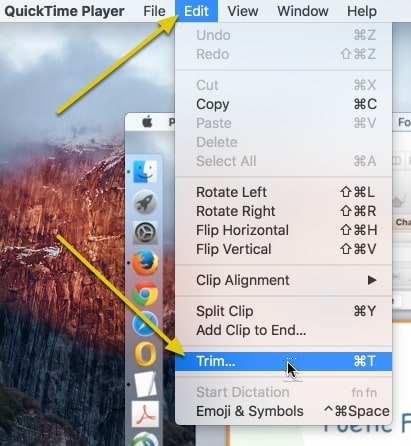 Step3: Use a handle on both sides to resist the part of the film that you want to trim. The rest of the film will remain yellow. Everything except yellow will be removed. 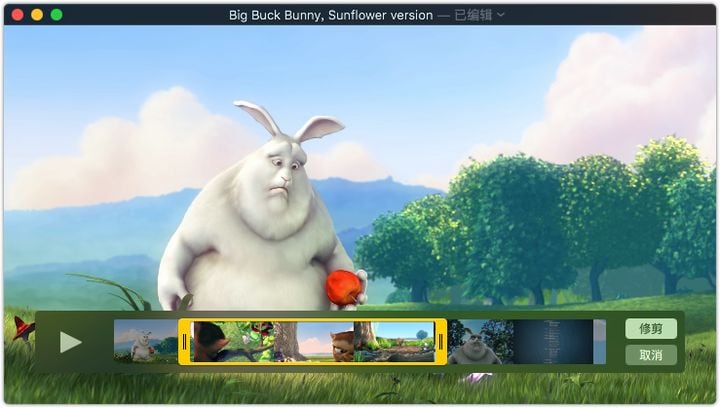 You can easily split your movie into separate clips if you want to. Then, if desired, you can modify these clips.

To split your movie into clips, use one of these methods.

Step1: Click the Play button to jump to the part of the clip where you want to split, and then pause it.

Step2: Move the playhead where you want to split the position, then select Edit > Split Clip.

Step3: If you want to make more splits, drag the playhead to the location where you want to split, and then perform step 2 again.

You can easily rotate video clips with QuickTime Player. Just follow these steps:

Step1: Open the movie or clip in the QuickTime Player app on your Mac.

Step2: Select the clip by going to View > Show Clips.

Step3: Choose to rotate the clip left or right, or flip it horizontally or vertically, from the Edit menu.

You can easily trim and adjust your video clip with Filmora. Once you've got a clip added to your timeline, it's easy to adjust it. Filmora makes it very easy to change the speed of the video. Simply double-click on the video in your timeline to access the Speed option. Now, move your cursor to the right to speed up the video, or to the left to slow it down.

Filmora supports almost all popular video formats as well as audio and video formats. It also includes support for 4K video and GIF files. In addition, Filmora allows you to import photos and clips from social networks such as Facebook.

Wondershare Filmora is also equipped with many advanced editing tools. Keyframe animation feature that lets you add custom animations that combine with settings to improve visual interaction and overall aesthetics.

Motion tracking function that allows you to capture the movement of a specific moving person or object in the frame and add captions, effects, text, etc., edit, crop and merge video footage.

Video stabilization to help correct image distortion due to camera shake, and pan and zoom objects for added effect. Colour correction function for video recording. It can be applied to multiple clips at the same time.

Is Wondershare Filmora Worth for Trying?

As we mentioned above, Wondershare Filmora is an elegant, full-featured video editing software that includes a variety of basic and advanced video editing tools. It has an easy-to-use interface that allows you to easily add effects, transitions, and edit your videos. You can use it to create random videos or professional videos using the software. So yes, this video editing software is for everyone. Well, you should try the free version and you won't regret.